Previous Next
Inequality Has 1,000 Faces

CEO pay is one.

I care about inequality. Even though I’m a small-government conservative, I’ve been donating to Democrats this year because I’m focused on one particular issue: share buybacks. They were illegal until 1982, and I want them to be illegal again. (SEC Rule 10b-18 made them legal). But Republicans won’t do it. Share buybacks are the subject of many boldfaced headlines. CEO pay is 278 times the pay of the average worker compared to 50x in 1982 and 20x in 1965. And it’s almost exclusively from the value of options awarded to CEOs in their compensation packages. It’s true for C-suite executives in general. 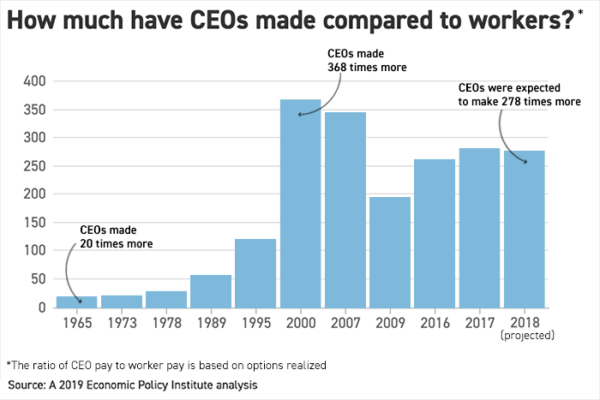 Companies primarily fund these buybacks with debt (or tax-free funds repatriated during recurring tax holidays under the rubric that those funds will be used for investment). With fewer shares on the market their value increases, and CEOs cash out with big profits and leave a pile of debt to destroy a company. Buybacks totaled about $1.1 trillion in 2018 and about $480 billion in 2019. I’ve been beating the drum about this for years.

Defenders argue that share price increases benefit everyone, especially pension funds, some of which are required to purchase shares in a particular company. That’s complete bull.

First, according to the Harvard Law Review, CEO Tenure Rates, the average tenure of a CEO in a publicly traded company, is about five years. When a company borrows money to buyback shares, they tap the bond market with a longer-than-five-year maturity. The CEO is long gone before the loans come due. While buybacks often increase the stock price, the loans weaken the balance sheet, leverage ratios, coverage ratios, etc.. They put the companies at greater risk.

The second reason is more philosophical. These guys are taking over a mature company. Someone else had the vision, took the risk, dedicated their life to making a company profitable. Those people deserve the rewards accorded that accomplishment: the American Dream, if you will. While there are exceptions, by and large, the guys who come in afterwards are just managers. They do not deserve to be compensated like they’re a visionary entrepreneur.

All the best,
PAS